CHP’s involvment in the recent fires 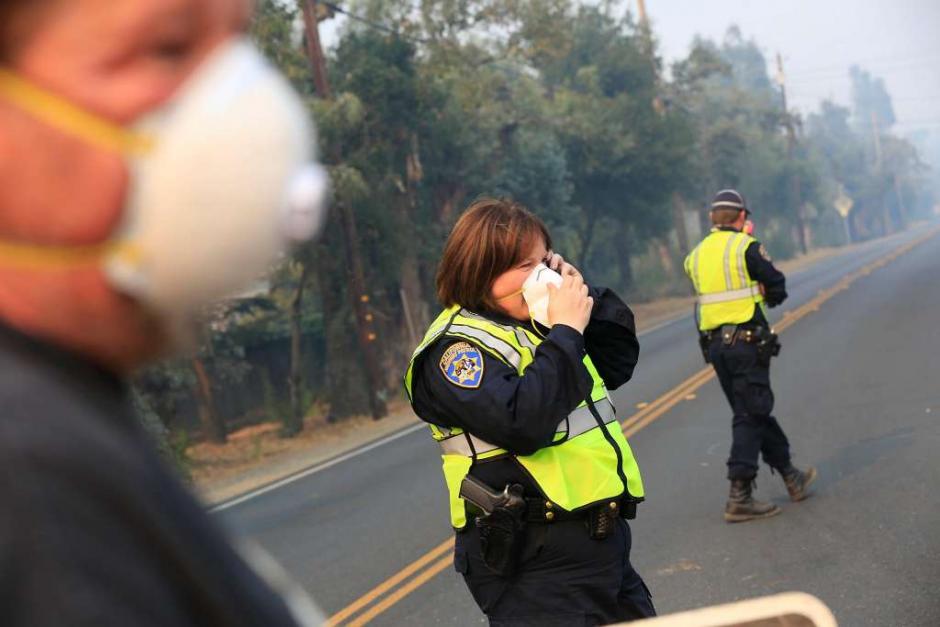 The following is a collection of stories about CHP’s involvement in the recent fires that have devastated Northern California.

There’s a rule in evacuated parts of Wine Country: Once you leave, you can’t come back.  Police cruisers, cones and orange-and-white barricades stand between residents and their homes. Officers hold the line and answer questions from anxious homeowners.  No, you can’t go down that road, they tell them.  There’s a downed tree. A power line in the road. A fire burning just over the hill.  Most conversations end there.  Not for California Highway Patrol Officer Tracy Ross.

A reunion took place between a CHP helicopter crew and the family they rescued right after the Atlas Peak fire started on Sunday night.  The father of the family made a difficult decision. This was the first time since the rescue that the CHP helicopter crewmembers saw Pepe and Graciela Tamayo, their son Jesse and his grandparents.

An emotional reunion at took place at Napa’s airport Wednesday night. But it almost didn’t happen. Pilot Pete Gavitte was flying his CHP chopper Sunday night toward Atlas Peak and saw what he said “looked like a nuclear bomb going off.” Gavitte and partner Whitney Lowe raced to the rescue and spotted the Tamayo family below with no way out. Pepe Tamayo knew it was a life-or-death moment.

California Highway Patrol aircraft have rescued a total of 44 people, as well as five dogs and a cat, while responding to the North Bay fires that have killed at least nine people and destroyed more than 1,500 structures.  Rescue operations have slowed significantly, however, with 42 of those occurring before Monday afternoon.  They also used the public address system on their aircraft to warn residents of the need to evacuate, and in some cases landed near homes under threat from the fire to provide notification.

CHP helicopter crew members risked their lives by flying in to rescue dozens of fire victims in the middle of the night.  Officer Shaun Bouyea told us one rescue involved a family with a small child that was trying to escape the fast-moving flames of the Atlas Peak Fire, north of Napa.  Boyea said the helicopter crew last night flew around looking for people who looked like they were trapped. They could tell what roads were blocked and they set them down and rescued them. There was no radio communication. They just did it by flying around seeing you who needed to be rescued.

(VIDEO) Pete Gavitt, a California Highway Patrol helicopter pilot, was flying rescue missions through heavy smoke, darkness and strong winds. There was room on his helicopter for four when he found five members of the Tamayo family. John Blackstone has the story.

It’s the little things.  As a retired California Highway Patrol officer and his wife, a nurse, were rooting around in the rubble after their home was damaged in the devastating wildfires, something caught their eye.  Beneath the rocks and debris, Eric and his wife found her sparkling ring intact in its box. That’s according to the San Francisco Local 798 firefighters union, who tweeted out two photographs of the smiling couple.  KTVU reached out on Tuesday for more details and is eagerly awaiting the full story.

Back
This item appears in:
This chp in the news has been archived and may contain content that is out of date.
CHP in the News October 16, 2017