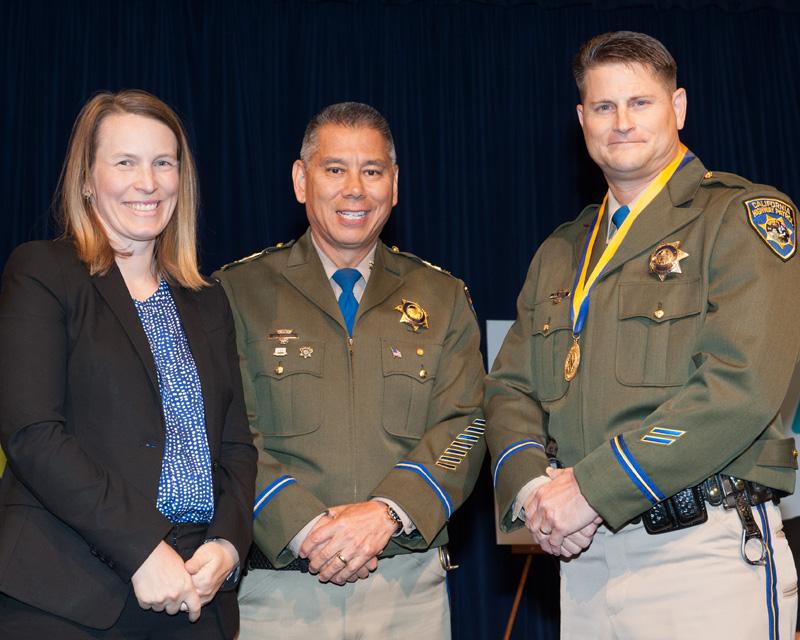 Office Brett Peters, I.D. 16710, of Oakland CHP was awarded the Governor’s Medal of Valor on April 12, 2016, for his actions in February 2015. He risked his own life while rescuing a suicidal man on an overpass in Oakland.

On February 21, 2015, at approximately 4:20 p.m., Officer Peters responded to a call of a stalled black Mercedes Benz blocking a traffic lane on westbound Interstate 580 to westbound Interstate 980, which crosses over State Highway 24. Unbeknownst to Officer Peters, the driver of the Mercedes Benz had psychiatric issues and had been experiencing unsubstantiated paranoid thoughts, was diagnosed with schizophrenia, and had not taken his medication.

After an initial contact, the man tried to jump off the overpass in a suicide attempt. Officer Peters recognized the danger and, without hesitation, quickly ran toward him. Officer Peters grabbed hold of the man and a violent struggle ensued. The man attempted to break free from Officer Peters’ grasp by deliberately pushing and violently flailing his arms toward him. Although the danger of both the man and Officer Peters falling over the railing was extremely high, Officer Peters was determined and committed to saving the man’s life. Despite risk to his own life, Officer Peters held the man, who dangled over the freeway below, until another CHP officer, David Woodworth, I.D. 20447, and two off-duty officers, Daniel Mullens, I.D. 9298, of the Oakland Police Department, and Deputy John Stamps, I.D. 2131, of the Alameda Sheriff’s Department, arrived on scene and assisted Officer Peters in pulling the man back over the railing. The man was ultimately placed in custody and taken by ambulance to a psychiatric facility.

The medal of valor is the highest honor awarded to California’s public servants. Congratulations, Officer Peters!

Back
This item appears in:
This chp in the news has been archived and may contain content that is out of date.
CHP in the News April 14, 2016