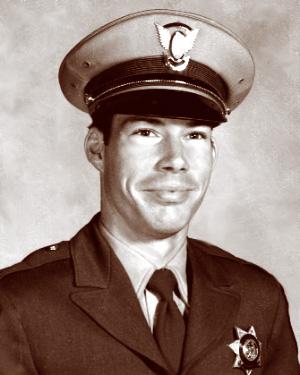 Officer Artie J. Hubbard was on his dinner break the evening of April 5, 1985 when he heard an 11-99 call (“officer needs help”). Hubbard was responding to the call when his patrol car failed to negotiate a curve, slid off the roadway and struck a utility pole broadside. The driver’s door on the patrol car took the full impact and the patrol officer suffered extensive injuries, including severing his spinal column. Hubbard was placed on life-support and survived. For the next 10 years his parents took care of him in their home, but he was limited to communicating through eye movement. Officer Hubbard died on December 8, 1995. At the time of the accident, he was a 10-year member of the CHP and had served in the Central Los Angeles and South Sacramento Area offices. Officer Hubbard was the brother of Officer Michael Hubbard (9579).