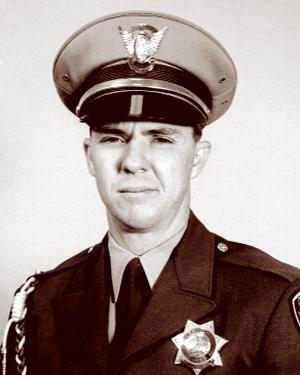 Officer Gerald N. Harris was directing traffic at an intersection in Bakersfield when he was struck by a hit-and-run driver. The impact of the collision threw Harris onto the cars hood and shattered the vehicles windshield. A passenger riding in the front seat pushed Harris back through the windshield, off the hood and flung him to the pavement before fleeing the scene. The 36-year-old patrol officer sustained a broken leg and other injuries, and his condition did not appear life-threatening. He subsequently required special medical treatment and the president of Continental Telephone in Bakersfield volunteered his companys private jet to fly Officer Harris to specialists in San Francisco, but Harris died from an embolism. Officer Harris was a seven-year member of the Patrol. The hit-and-run driver was apprehended and served 12 months in the county jail.