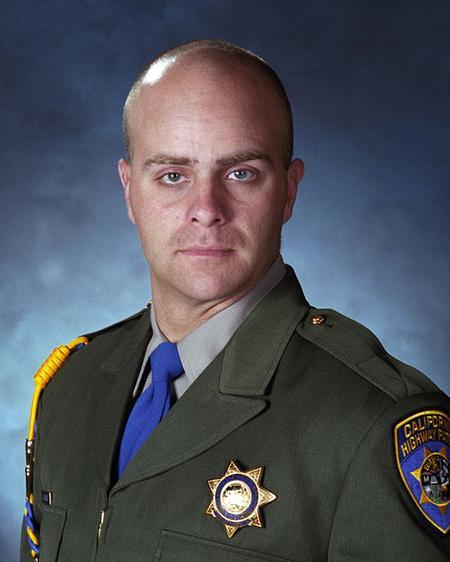 Officer John P. Miller, I.D. 18414, was killed Nov. 16, 2007, while responding to a pursuit involving a suspected drunken driver. He was on a county road in Livermore when his patrol car hit a tree.

Three CHP units were responding to a call to be on the lookout for a suspected drunken driver. Livermore Police Dept. located the driver and Miller was en route to the freeway to engage in pursuit.

Soon afterwards, citizens reported a CHP car was involved in a collision. Miller did not respond on the cell phone or the radio, and officers rushed to the reported location, finding his badly damaged car wrapped around a tree.

Officer Miller was pronounced dead at the scene at 9:23 p.m.

“When officers arrived, they all stayed on scene until he was transported by the coroner, including officers from the CHP, Livermore and Pleasanton Police Departments, Alameda County Sheriffs, the local fire department and the responding EMTs,” said Dublin Area Commander Mitch Mueller I.D. 11767. “A flag from the Dublin CHP office was draped over him, and there was a constant vigil until he was transported to the mortuary.”

“MAIT is investigating the accident and is working with authorities to pursue appropriate charges,” Mueller added.

Officer Miller was assigned to Dublin April 2, 2007, upon his graduation from the Academy. In his short time as an officer, he had befriended many fellow officers and was well-liked. He leaves behind his wife, Stephanie, and two children, Chandler 4, and Reese, 2. The family lives in Lodi.

A public viewing was held on Tuesday, Nov. 20, in Stockton, and funeral on Wednesday, Nov. 21, in Lodi. Soon to follow will be details from the funeral and photos. These will also be included in the December APB.