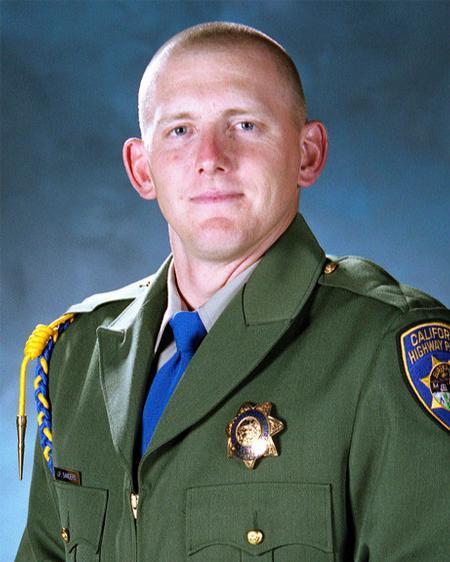 On Monday, December 15, 2008, at approximately 4:30 a.m., Officer Joseph Paul Sanders, I.D. 18781, of Santa Fe Springs Area, was struck by a car while laying a flare pattern in heavy rain. He was life-flighted to USC Medical Center in Los Angeles, where he succumbed to his injuries a short time later.

Sanders, age 29, was at the scene of a collision on eastbound State Route 60, near Azusa Avenue, in the City of Hacienda Heights, when a vehicle not associated with the original collision struck a third vehicle, which went out of control and struck him. Alcohol does not appear to be a factor in the collision. There have been no charges filed in the case.

Officer Sanders was about to mark his first year on the CHP. After graduation from the Academy on December 21, 2007, he transferred to Santa Fe Springs Area and was planning to transfer to the Modesto Area April 1, 2009. An Iraq veteran, he grew up in Galt, Calif., and served in the Marine Corps from 1997 through July 2006.

Sanders leaves behind his wife, Tondria, and four children, ages 7, 3, 10 months, and a 7-year-old stepson.

Sanders is the third officer from the Santa Fe Springs Area to die in the line of duty since 2004. He is the 214th line-of-duty death in CHP history.

Gov. Schwarzenegger said, “Maria and I were deeply saddened to learn of the passing of Officer Joseph Sanders, who dedicated his life to ensuring public safety. California is a better place because of his service and his sacrifice will not be forgotten. On behalf of all Californians, we send our thoughts and prayers to Joseph’s family, friends and fellow officers.”

Officer Joseph Paul Sanders, I.D. 18781, of Santa Fe Springs Area, was struck by a car while laying a flare pattern in heavy rain. He later succumbed to his injuries after arriving at USC Medical Center in Los Angeles.

After the funeral a private internment will be held for family and Santa Fe Springs CHP Office personnel only.