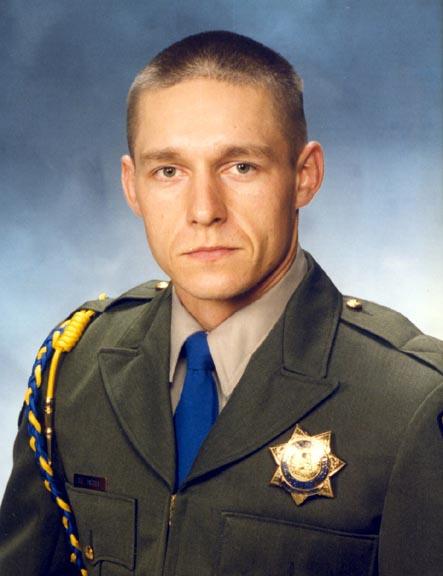 Officer Shannon Distel, I.D. 15357, of the Riverside Area, was killed Wednesday, Aug. 27, when his motorcycle collided with a pickup truck pulling a trailer. Investigators say Distel, 31, was patrolling on surface streets in Riverside at 4:15 p.m. when the driver of the pickup turned left in front of Distel at a busy intersection, causing Distel to run into it.

The driver of the truck, 31-year-old Miguel Martin, was not injured, and was arrested later on suspicion of vehicular manslaughter and driving under the influence of drugs. The accident remains under investigation.

Officer Distel graduated from the CHP Academy in September 1997. First assigned to the South Los Angeles CHP Area Office, he transferred to the Riverside Area Office May 1, 2002, where he served as a motorcycle officer.

Distel, a former Marine and air traffic controller at the El Toro Marine Corps Air Station, loved the outdoors and riding motorcycles. He participated in the 2000 Baker-to-Vegas Challenge Cup Relay while he was at the South L.A. Area.