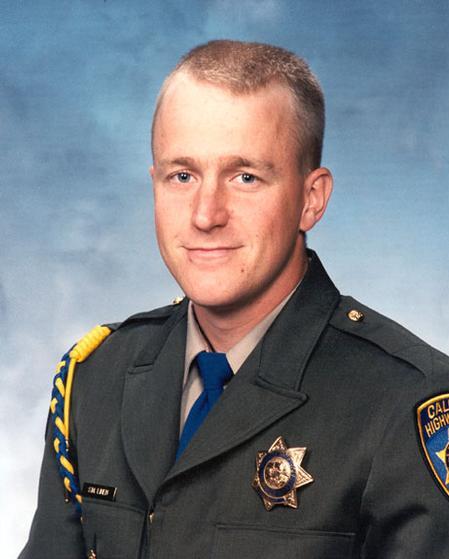 The 31-year-old officer was issuing a ticket to a speeder on northbound Interstate 5 in Leucadia when an underage, suspected drunken driver slammed into the back of the patrol unit, killing Officer Linen.

He is the second Oceanside officer to die in the line of duty in less than a year. The crash site is approximately 10 miles south of where Officer Sean Nava, I.D. 12890, died last October on Interstate 5 in Carlsbad when another underage and alleged intoxicated driver fatally plowed into him. Officer Nava, 33, was collecting the last of measurements of an earlier solo-vehicle crash involving another drunken driver.

Both Bates and Christopher Paul Merrick, then 20, who faces second-degree murder in Officer Nava’s death last October, reportedly were each returning with friends from a night of drinking in Tijuana.

Bates and his passenger, Lance Cpl. Christopher Sterling, 20, were approximately 12 miles shy of Camp Pendleton where they were stationed.

The unfortunate series of events unfolded about 6 a.m. while Officer Linen was ticketing the driver of a Ford F-150 for speed. Bates, behind the wheel of a Dodge Intrepid, drove on the freeway shoulder at an estimated 85 mph. It was unclear if the pickup or the patrol car struck Officer Linen.

Officer Linen’s vehicle, which smashed into the Ford truck, burst into flames. The crash launched him into an embankment. The impact placed Officer Linen so close to the truck, his flashlight landed in the passenger side of the pickup’s cab.

Immediately following the crash, other correctional officers found Bates behind the wheel of the Intrepid “scrunched up, with his seat belt on,” said Oceanside Public Affairs Officer Tom Kerns, I.D. 9192, in a newspaper interview. The occupants in the Ford pickup suffered minor injuries. Sterling, owner of the Dodge Intrepid but who was too tired to drive it, suffered a broken arm and other injuries. There are no charges against Sterling at this time.

Officers arrested Bates on suspicion of felony manslaughter with negligence and felony driving under the influence of alcohol. Officers booked Bates at the San Diego County Jail in Vista with bail set at $1 million.

Born in San Jose, Steve and his family moved to San Diego in 1985 then later to Rancho Bernardo. In 1988, he graduated from Mt. Carmel High School. Five years later, he earned a bachelor’s degree in criminal justice from San Diego State University. Three days after his 24th birthday, Steve’s dream of a career in law enforcement was fulfilled with his July 25, 1994, appointment to the CHP. After graduating from the Academy, Officer Linen first assignment was the Monterey Area Office. He subsequently transferred to San Diego then Oceanside in August 2000.

Steve loved to fish, was an avid bowler, a Raiders football fan, and a licensed pilot, frequently flying to Catalina and Laughlin, Nev., Officer Kerns recalled.

On the job, like Officer Nava, Linen preferred the graveyard shift because he wanted to stop drunken drivers.

“He wanted to work in the mission of stopping the DUI driver,” said San Diego Area Officer Mark Gregg, I.D. 12733, in a newspaper interview. “He strongly believed in that message. Unfortunately, it was one that killed him, so we have to make sure that his work was not in vain and this just forces us to rededicate our efforts.”

Officer Linen was the 192nd line-of-duty death since the Department’s formation 72 years ago. Oceanside Officer Nava died Oct. 28, 2000, and Sgt. Gary Wagers died March 15 in a solo car accident during a deuce shift in the Woodland area.

Services for Officer Linen were Aug. 16 in Oceanside. His survivors are his mother Mary Monahan, of Temecula; his father Stephen Linen Sr., of Seattle,Wash.; grandparents Robert Monahan Sr., and Lillian Monahan, both of Temecula; brother Christopher of San Diego, girlfriend Kristi Robinson of Menifee; and numerous aunts, uncles, nephews and cousins.