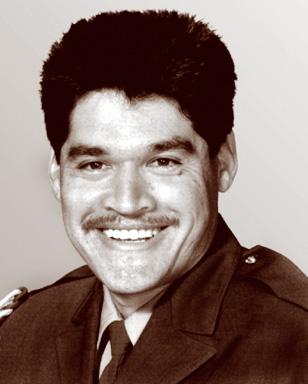 CHP Officer Killed on Side of Road After Saving Partner

Officers Saul Martinez and James D. Rice, paired on graveyard shift, were investigating a vehicle parked on the shoulder of a road north of Palm Springs. An oncoming car, traveling more than 15 feet off the roadway, barreled down on the two officers. Martinez shoved his partner to safety, only to be struck and critically injured himself. The 39-year-old officer died eight days later without regaining consciousness. Martinez, a seven-year member of the Patrol, had just been named “Latino Peace Officer of the Year” for San Bernardino and Riverside Counties in recognition of his outstanding service in “El Protector,” a CHP traffic and safety program for the Latino community. Governor Pete Wilson posthumously presented him with the “Medal of Valor”, the state’s highest award, in recognition of his heroism. The Coachella Valley School District, in an unprecedented action, voted to name a new elementary school in his honor. Misdemeanor manslaughter charges were filed against the driver who struck and killed Officer Martinez.