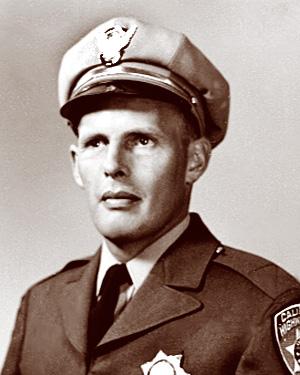 Officer Charles H. Sorenson had just received a radio call about a robbery in Lodi when he spotted the suspect vehicle, whipped his patrol car into a U-turn and began pursuit. During the chase, the suspect driver lost control of his vehicle, crashed and continued to flee on foot. Sorenson got out of his car and followed the suspect. Apparently he was unaware of the second suspect with a stolen handgun who ambushed the 32-year-old patrolman, killing him with two shots fired at point blank range. Next, the pair commandeered the officer’s patrol car, roared down the highway at speeds close to 130 MPH and were stopped only when they rammed a police barricade, killing a sheriff’s deputy. The felons, two juveniles, were captured and charged in the deaths of the two law enforcement officers.