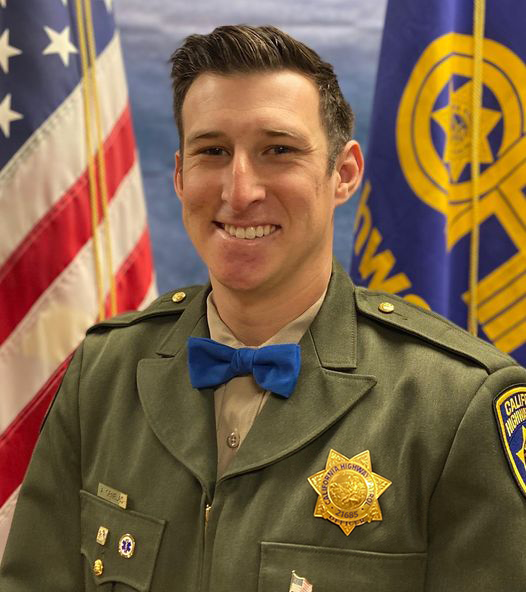 California Highway Patrol Commissioner Amanda Ray said, “I am profoundly saddened upon receiving word this morning of the death of Officer Ornelas. For the last nine days, Andy has valiantly fought to stay alive, but despite his efforts, the tireless work of medical staff, and the continual support of family, friends, and the Antelope Valley squad, Andy succumbed to his injuries early this morning.

“On behalf of the entire CHP family, my thoughts are with Andy’s loved ones, the members of the Antelope Valley squad, and all who knew him as we all grieve his death and mourn the promising future this young officer had before him. We will never forget his service and the ultimate sacrifice he made on behalf of all Californians,” Ray said.

On Nov. 23, 2020, at approximately 7:05 p.m., Officer Ornelas was on patrol, riding his departmental motorcycle in Palmdale when he was involved in a traffic crash. Officer Ornelas sustained multiple injuries and was transported to Antelope Valley Hospital, where he received around-the-clock care.

Officer Ornelas, 27, was a four-year veteran of the Department. He had been assigned to the Antelope Valley Area since December 2019. He followed in the footsteps of his mother, Kellie Ornelas, who is a retired CHP officer, I.D. 13408, from the same Antelope Valley Area office, and his father, Arturo, a motorcycle officer with the Los Angeles Police Department. He is survived by his wife, Taylor; his brother, Cody, a CHP officer, I.D. 22401, assigned to the Central Los Angeles Area office; his sister, Nikki; and an uncle, retired CHP Captain Andreas Ornelas, I.D. 11490.

Officer Andy Ornelas becomes the 232nd officer to die in the line of duty in the 91-year history of the CHP.

Andy was remembered for his dedication to service of others at a funeral service held Wednesday morning, Dec. 9, at Lancaster Municipal Stadium with limited attendance due to COVID-19 restrictions. It was livestreamed as well, and is available on the CAHP website at www.thecahp.org.

Andy’s family took turns speaking to those gathered. His sister Nikki Ornelas said, “Andy spoke out when it really counted. His strong principles did not allow him to let something wrong stand unchallenged. And he cared enough to act, to follow through. He never let anyone or anything stand in the way of making things right.”

His brother, CHP Officer Cody Ornelas, said. “You were Superman to me. You could do anything and make it look easy. You’re not only my brother, my blood, but also a brother in arms, my inspiration, my friend.”

Cody continued, “When it comes to Andy, there’s no amount of words that can properly describe who he was; only those that truly knew him understood his magic; his ability to lighten any mood; his constant curiosity and drive to try new things; and his insane work ethic; and ability to outwork anybody. Andy, I will miss our conversations about life and family. You always seemed to have all the answers. I love you with all my heart. Rest easy, brother, I’ve got it from here.”

Taylor Ornelas said she and Andy had a fairytale love story. “It began when we were just kids,” she said. “I was 14; he was 16; and we spent the next 11 years growing up together and devoting our lives to each other. Andy was not only the light of my life but he lit up every room that he walked in. He was smart and funny. He was the type of person that made you want to be a better person because he could see the light in any dark situation.”

“Today he wouldn’t want us to be sad, but he would want us to smile and remember him as the loving, caring, selfless person that he was,” said Taylor. “Besides me, riding his motorcycle was his favorite thing in the world. I take comfort in knowing that he went out doing something that he loved, riding his Harley. If I can give you anything out of this, there’s a little bit of comfort in that,” she said.

CHP Commissioner Amanda Ray also spoke. “Andy’s dream was to continue in his family’s love for public service and to become a CHP officer,” Ray said. “On June 16, 2017, Andy accomplished his dream and graduated from the CHP academy. But unfortunately, that dream was taken away from him far too soon.”

Ray quoted writer Leo Rosten, who wrote that the purpose of life is to be useful, responsible and compassionate.

“It is, above all, to matter, to count, to stand for something, to have made some difference that you lived at all,” Ray read. “Andy personified all of these things. He definitely made a difference, and he accomplished all of these purposes at the young age of 27.”

“Becoming a motorcycle officer after only nine months on the job was an incredible accomplishment, one done by only a few,” Kellie Ornelas said.

“He said, ‘Yes, mom. As you and Dad taught me, we have to live every day like it’s your last,’ ” she said. “That is exactly what Andy did. He lived fully each and every day. I thank God for the amazing 27 years he let me have my son. … I know Andy is among the angels; God probably gave him a motor instead of wings. Rest in peace, my son. I will see you again.”

Andy’s father, Art Ornelas, said one of the proudest moments in his life was putting Andy’s badge on his son’s chest.

“We had a running joke,” Art Ornelas said, recalling the time Andy graduated from motor school. “I said I am so proud you’re a highway patrol officer, a motor officer at that. I said but please, don’t ever forget an LAPD officer taught you how to ride.’ He would look at me and chuckle and say ‘You got it dad; not a problem.’ Son, Godspeed. I will see you again.”

A memorial fund has been set up through the CAHP Credit Union. You can make donations on their website, or mail a check to:

View the memorial service here, or view the photos below. 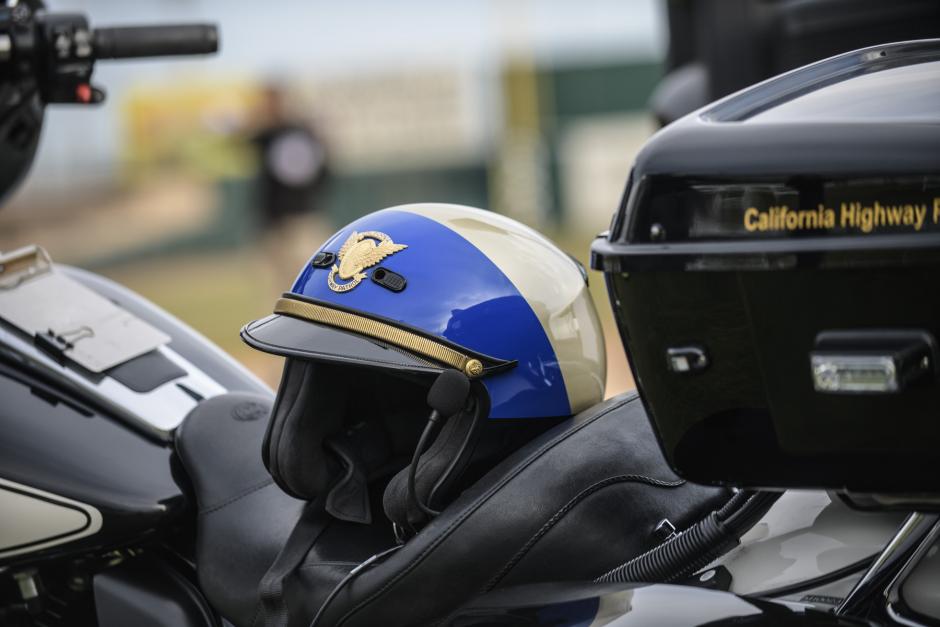 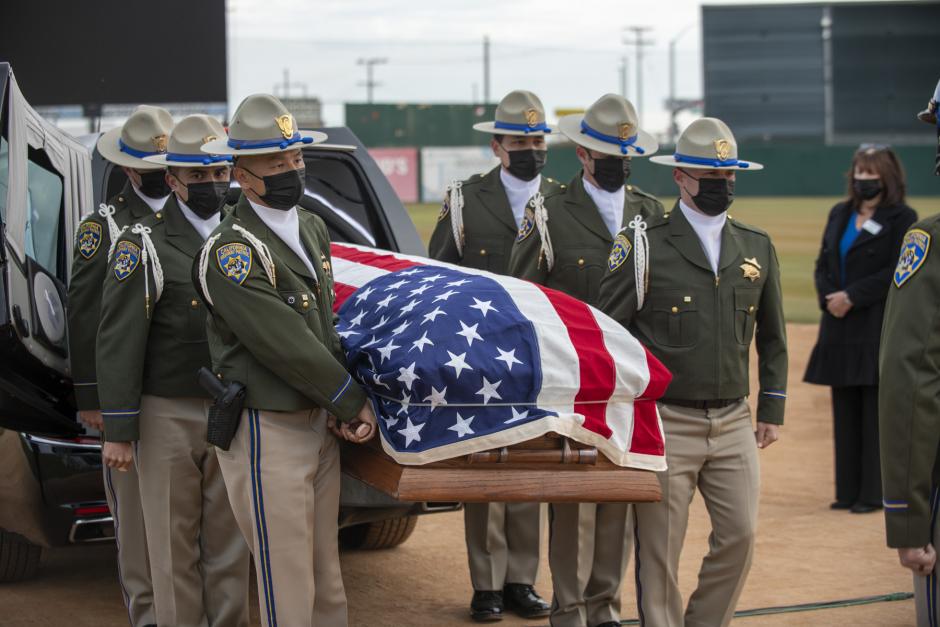 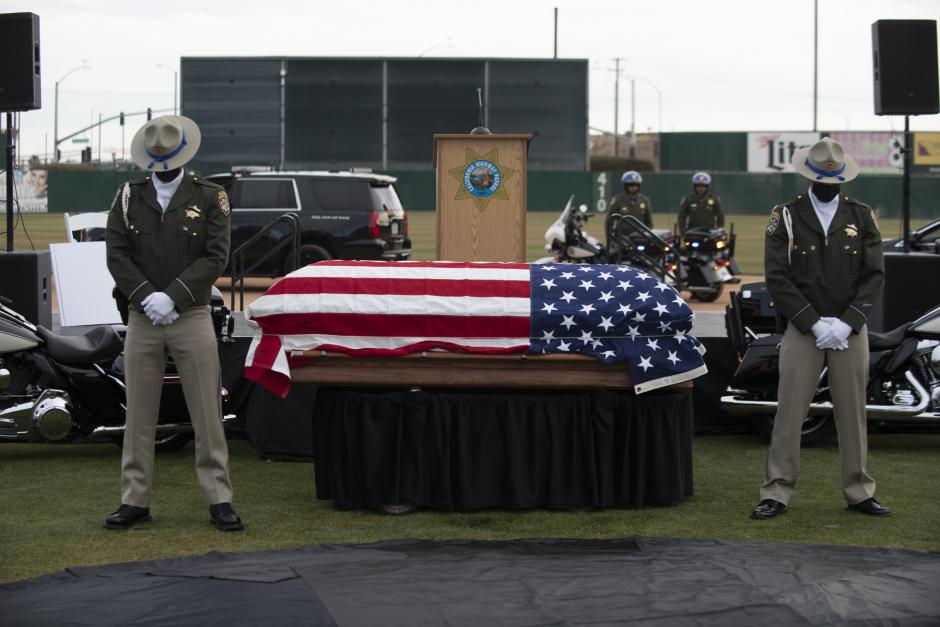 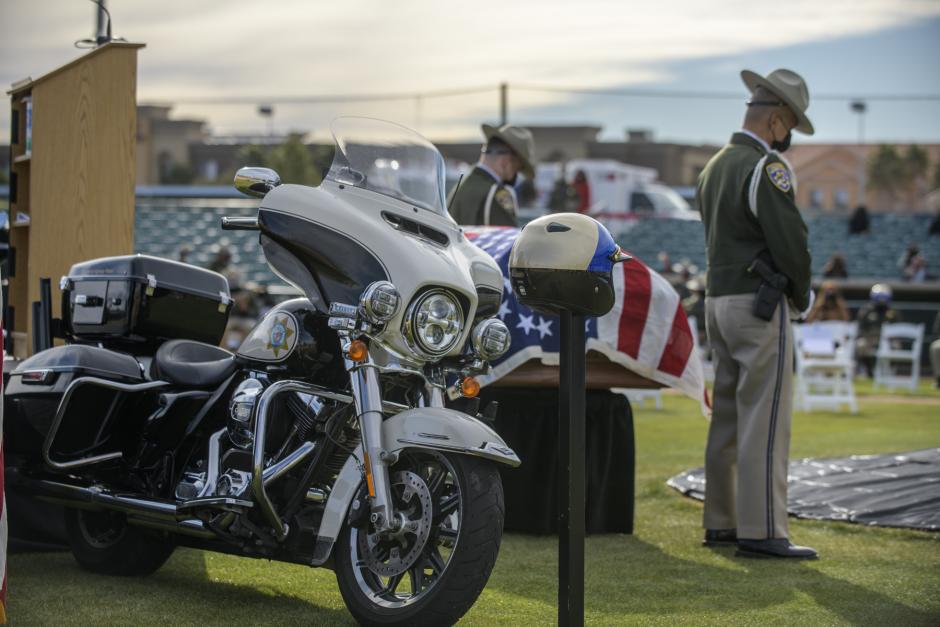 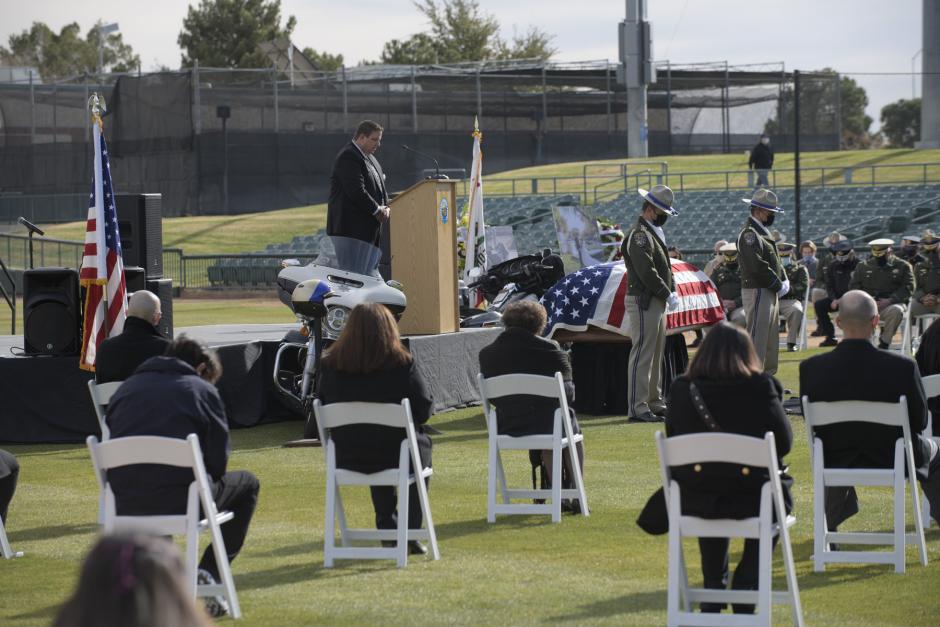 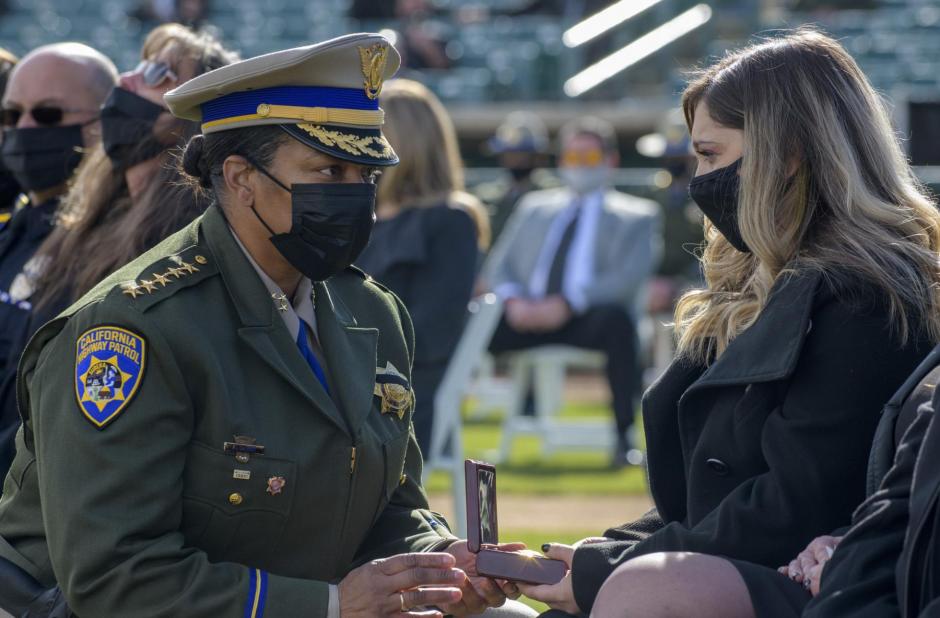 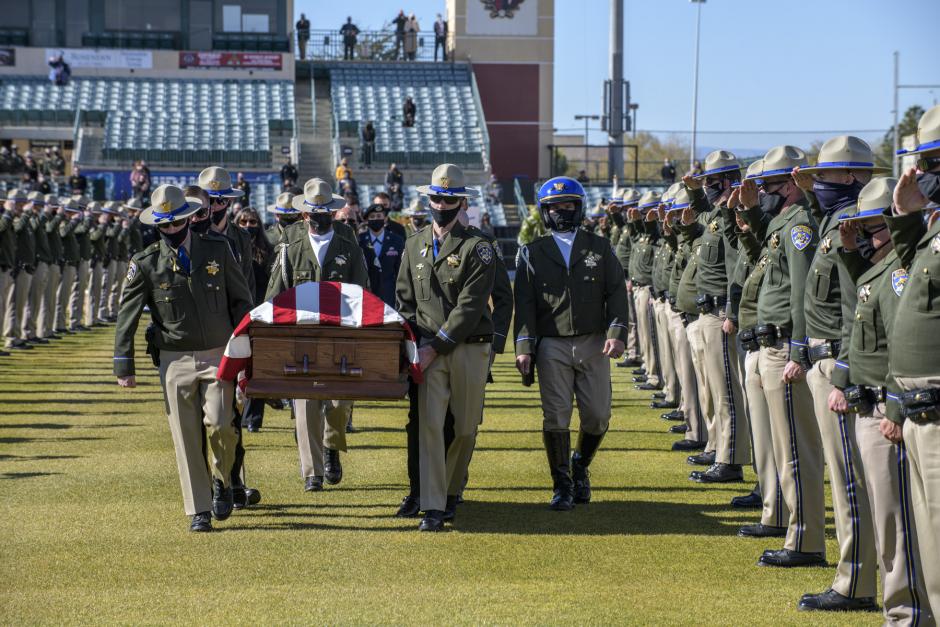 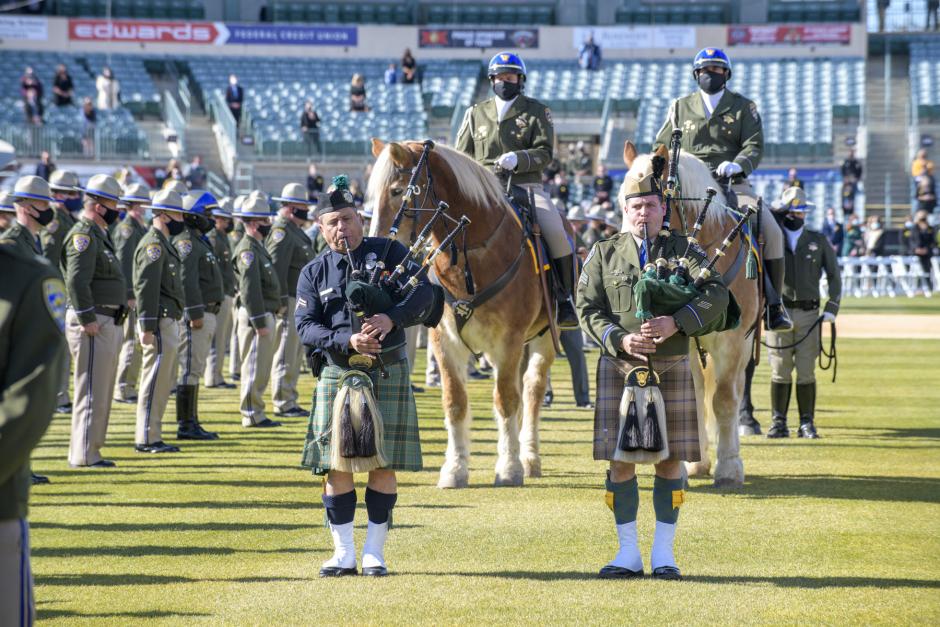