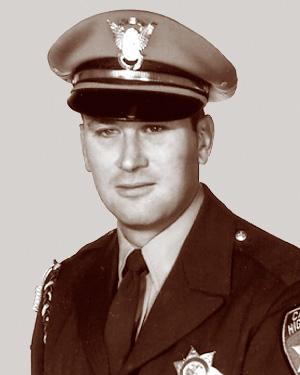 Officer Dale M. Krings and his partner, Officer Vincent Bianchini, were near the end of their graveyard shift and having breakfast at a restaurant next to San Francisco International Airport, when a restaurant patron confronted the officers, saying, “Okay, gentlemen, you’ve had it!” Without further warning he drew a rifle and opened fire, striking Officer Krings. Although mortally wounded, Krings returned fire and killed the gunman. Investigation revealed the assailant, a former mental patient, was a regular customer at the coffee shop and had been overheard on several occasions to say, “I hate cops!” Krings, 34, had been a member of the Patrol for six years.