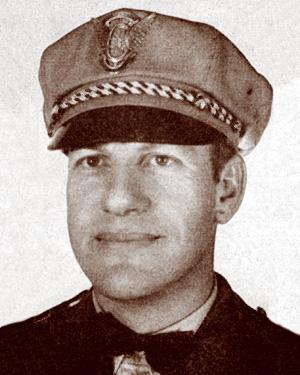 Sergeant Forest M. Underwood was shot and killed by a criminal wanted for kidnapping and robbery. Underwood was writing a parking citation when a taxi abruptly pulled alongside. The driver jumped out, shouting excitedly that a robber was inside his cab. The suspect immediately opened fire, felling Underwood with two shots. Though mortally wounded, the patrol officer returned fire but his shots missed the assailant. While he lay dying, Underwood noted the license number of the getaway car and a description of the murderer at the bottom of the parking citation he had been writing.