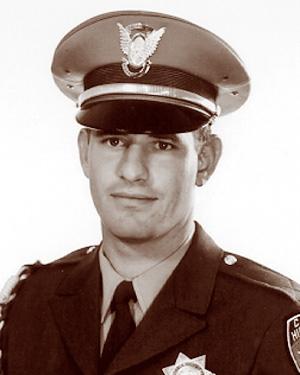 Officer Franke A. Story and his partner, Officer Ernest H. Goff, were on the graveyard shift patrolling along U.S. Highway 86 north of Imperial when they stopped a truck-tractor rig for a routine registration check. While Goff radioed, Story stayed with the driver, who maneuvered himself into a position where he could grab Goff’s handgun, and opened fire. Story, 25, was killed instantly. Goff, 44, was wounded but struggled with the suspect and was able to overpower and arrest the killer. The assailant, who had been driving a stolen rig, was charged with murder and attempted murder. Officer Story was the nephew of retired Lt. David R. Story (1222).