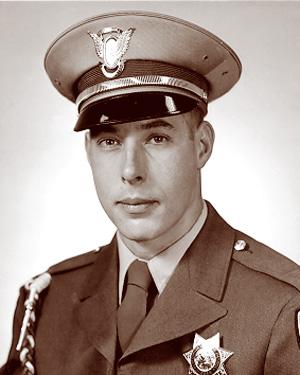 Officer Glenn W. Carlson, on duty in a chain-control area of the Sierras, stopped a vehicle with three male occupants on a speeding charge. A license check proved negative, but just a few minutes after the vehicle drove off, information was radioed that the car was stolen. Carlson pursued the suspects and stopped the car again. One of the suspects opened fire, killing the 33-year-old patrolman with five shots. One of the bullets pierced the citation he had just written to the suspects. The three ex-convicts were later captured and indicted for the murder of Officer Glenn Carlson.