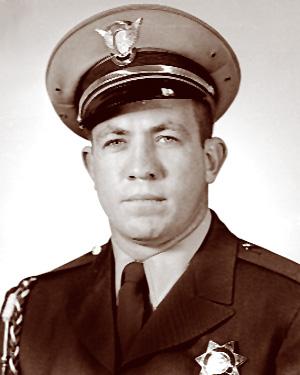 Officer Herbert F. Dimon was pursuing a speeding car in East Los Angeles when his motorcycle collided at an intersection with a motorist who ignored or did not see the red light or hear the siren. Dimon was wearing a safety helmet, but the impact killed the 28-year-old officer instantly. Officer Dimon had graduated from the Academy just four months earlier. Only hours before his death, he had received a letter from a citizen he cited a few days earlier, stating:

“I have received citations before, but none of which reflected so adversely on my driving habits or ability. I assumed that I was a pretty good driver. Your genuine concern for my safety, and the safety of others on the freeway, and your remark you hoped you could help me improve my driving habits, started me doing so serious thinking.” The citizen further declared that he had established some driving rules for himself and conforming to them had been a ”wonderful experience.” He continued by saying, ”I feel you will be pleased to know that your work is not all in vain.”