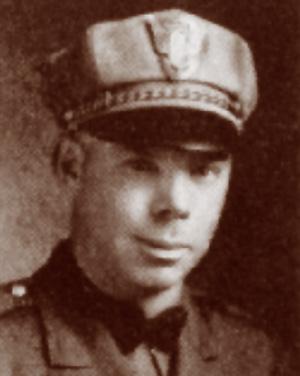 Officer Maurice W. Owen was traveling north on Highway 99 responding to an emergency call. A car made a left turn in front of his motorcycle, and he was thrown over the vehicle’s hood, sliding 20 feet on his back and sustaining lacerations and internal injuries. In the true spirit of a traffic officer, he got to his feet, pulled out his citation book and handed the driver a ticket for reckless driving. Only then did he seek medical treatment. A month later, he was pursuing a speeder and was again injured when he slid his motor to avoid colliding with a car. Owen insisted on returning to work after each incident, but after several weeks of intense suffering, checked into a hospital where he died from a blood clot which formed as a result of internal injuries. Officer Owen, 42, joined the San Joaquin County Motor Patrol in 1927 and the Highway Patrol in 1929 where he served 11 years.