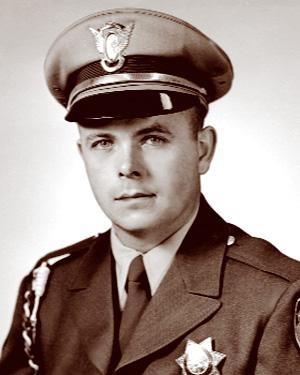 Officer Richard D. Duvall’s last radio message was, “I’m chasing a fast one.” Duvall did not know that the motorist on U.S. Highway 66 outside Victorville was an escaped felon driving a stolen car and wanted for armed robbery. As soon as the vehicle was pulled over, the ex-convict opened fire, killing the 26-year-old patrolman. Duvall had served less than two years with the Patrol. His death was instrumental in CHP Commissioner Bard Crittenden’s decision to require that officers pair up on the graveyard shift and parts of the evening shift.