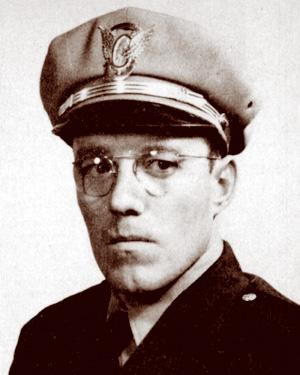 Officer William M. Chansler, 32, was off duty, but responded when a call came that an armed suspect had shot a waitress and was holding hostages in a Yreka restaurant. When Chansler arrived he ordered the suspect to drop his weapon. Instead, the felon swung the barrel of his rifle toward the patrolman and fired three shots. Chansler fell, mortally wounded, but returned fire and killed his assailant with one shot. He had been a CHP officer for five years and had only recently been transferred to Yreka from Ventura. Chansler was posthumously presented with a Certificate of Valor for heroism by Governor Goodwin J. Knight on October 15, 1954. Officer Chanslers daughter, Judy, worked as a CHP Dispatcher for several years and his grandson is CHP Officer Aaron York (14685).