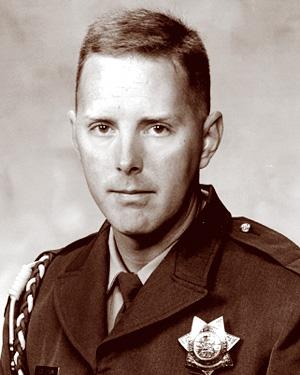 At approximately 12:25 a.m., Officer Christopher Lydon and his partner, Officer Jeffery Jenkins, were advised of a possible drunken driver northbound on State Route 67 at Interstate 8. Officers Lydon and Jenkins responded from a distance of approximately four miles and attempted to intercept the vehicle from southbound SR 67. As the patrol unit rounded a sweeping left hand curve, it lost traction and spun out of control. The car vaulted off the edge of the freeway, overturned and struck a tree bordering the frontage road. Rescue personnel extricated Officer Lydon from the vehicle, but emergency medical personnel pronounced the 27-year-old dead at the scene. Officer Jenkins sustained bruises and lacerations to his face and a separated shoulder, but was able to free himself from the vehicle. Officer Lydon was a two-year member of the Patrol, and had recently transferred to El Cajon after his first assignment with the Central Los Angeles Area.