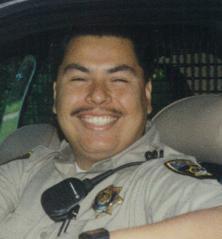 California Highway Patrol Officer Danny Benavides was killed Friday, May 7, 2010, when his Cessna 206 patrol aircraft crashed in a remote section of desert southwest of the Salton Sea in Imperial County.

At approximately 9:30 a.m., a CHP air unit, Air-63, was working a speed detail on State Route 86, north of Hoskins Road.  After completion of the detail, Air-63 was en route to work a separate speed detail on Interstate 8, west of Dunaway Road, when the El Centro Communication Center lost contact with the pilot.  A military and multi-agency search-and-rescue operation for the aircraft was immediately initiated.  At approximately 4:03 p.m, debris from the aircraft was located by a California State Park Air Unit in a rugged, mountainous, desert area near SR-78, west of Split Mountain Road. Benavides was pronounced deceased at the scene.  The cause of the collision is being investigated by the National Transportation Safety Board (NTSB).

California Highway Patrol Officer Danny Benavides was a 13-year veteran with the Department and assigned to the Border Division Thermal Air Operations Unit since July 2006 as a fixed-wing aircraft pilot. His previous assignments included Monterey, San Jose, San Diego and Oceanside CHP Area Offices.  Officer Benavides was a resident of the Coachella Valley.

The CHP would like to thank all the agencies that assisted with the search and to the community for their support.