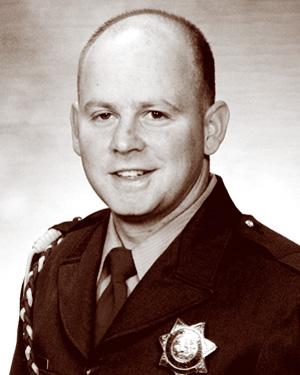 Officer Daniel J. Muehlhausen had finished investigating a minor traffic accident and was dispatched to assist a disabled motorist about 11 a.m. Officer Muehlhausen was traveling east on Highway 62 near Twentynine Palms, when a mini pickup attempting to pass on a hill crossed over double yellow lines and struck his patrol car head on. The 30-year-old Patrol officer and the two young male occupants of the truck were killed instantly. Both vehicles were immediately engulfed in flames. The rural two-lane stretch of highway where the crash occurred was marked with “No Passing” warning signs because of numerous dips and blind curves that hamper a driver’s view of oncoming traffic. Only hours earlier, the driver was traveling in a group of four mini-trucks when one of the drivers was ticketed for trying to pass unsafely. Officer Muehlhausen was assigned to the Indio Area after graduating from the Academy two years earlier.