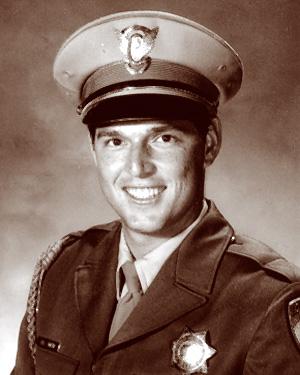 Officer David W. Manning was riding his CHP motorcycle on his way home from work at 10:30 p.m. on January 15, 1996 when he was involved in a solo motorcycle collision. Manning was thrown from his motorcycle and suffered severe head trauma. He remained in a coma and died on February 15, 1996. Officer Manning had been one of the first officers assigned to the “new” Bakersfield Area motor squad when it was reactivated after a 25-year absence. The 31-year-old patrol officer liked to carry candy canes with him to hand out to children he encountered. At the scene of his fatal collision, Manning’s motorcycle was on its side and scattered all around him were his candy canes. Officer Manning was a member of the CHP for eight years and served in East Los Angeles and Bakersfield.