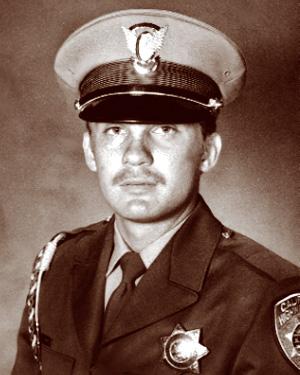 Officer Dean J. Esquibel was providing back-up in the high-speed pursuit of a fleeing motorcycle on State Route 198 neat the Kings-Tulare County line. The two units were passing a truck when a driver ahead of the truck braked and a passenger car slowed and began to skid sideways. The truck then swerved left to avoid hitting the skidding car, forcing the two officers to swerve. Both patrol units spun out of control and Esquibel’s patrol car veered into a parked Caltrans road grader and burst into flame. The impact of the collision pinned the officer inside the burning vehicle. A passing truck driver extinguished the flames and CHP Officer Greg De La Cruz, who was himself injured, pulled Esquibel from the wreckage. Office Esquibel, who was 23 years old and a member of the CHP for just one year, died two weeks later. The motorcyclist was captured and charged with felony hit-and-run driving, resisting arrest, evading a police officer and driving with a suspended license.