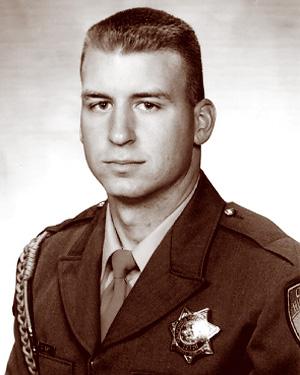 Officer Don J. Burt stopped a motorist for a traffic violation in the city of Fullerton and discovered the man’s license was suspended; he then attempted to impound the man’s vehicle. Burt requested a tow truck and started inventorying the vehicle’s contents when the driver exited the car, began a physical confrontation with the officer, then pulled a 9mm pistol and opened fire. Officer Burt was shot six times, but his safety vest prevented fatal wounds. Burt was lying on his back on the ground when the gunman walked up and fired a seventh time – the fatal shot – to the officer’s head, killing him instantly. Officer Burt, 25, had been a CHP officer for 15 months. When he graduated from the Academy in April 1995, his father Sergeant Don R. Burt (6889) had pinned on his badge. Burt’s killer fled from the scene in Officer Burt’s patrol vehicle, but was apprehended two days later in Texas and extradited to California. The killer was subsequently convicted of murder and sentenced to death.