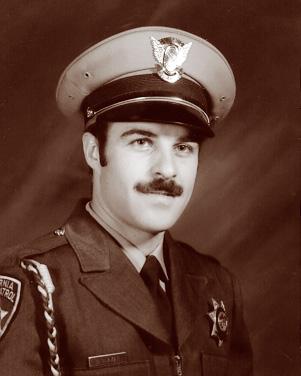 Officer Hugo Olazar and his partner, Officer Javier Rocha, had just pulled onto the shoulder of Interstate 280 to investigate a solo-vehicle collision when their patrol car was rammed by a pickup traveling at a high rate of speed. The impact caused the body of the patrol car to buckle, jamming the doors shut. The patrol car then burst into flames, trapping both officers inside. Officer Javier Rocha was able to escape the burning vehicle by shooting out a side window and tried to pull his unconscious partner out, but his efforts were unsuccessful because of the intense flames. Rocha then went to the burning pickup and pulled its three occupants to safety, suffering second- and third-degree burns. The pickup driver was charged with felony DUI, vehicular manslaughter and driving on a suspended license. Officer Olazar, 35, had been a member of the CHP for seven years.

Back
This item appears in:
Line of Duty September 2, 1989