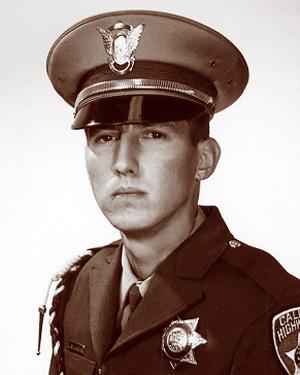 CHP officer killed on side of road

Officer James J. Schumacher, Jr. stopped and cited a speeding car on State Route 99 and was obtaining the driver’s signature when a passing car drifted toward the shoulder, sideswiped the parked car, and struck Schumacher. The officer was dragged more than 100 feet before being thrown free. He died instantly. The elderly driver who hit Schumacher apparently fell asleep, and was charged with manslaughter. Schumacher, 33, was a 12-year CHP veteran, and had served in the South Los Angeles and Westminster areas before transferring to Merced in 1980. In a tragic footnote to the crash, Schumacher’s badge, ripped from his shirt, had been taken by a souvenir hunter. A facsimile badge (7164) had to be produced for the Schumacher family. On June 13, 2002, that portion of SR 99 was named the “CHP Officer James J. Schumacher Memorial Highway.” His son, Andrew Schumacher, (15732), later became a CHP officer in Merced and worked the same beat his father once did.