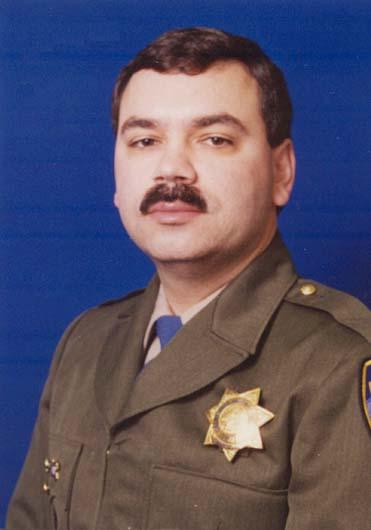 Officer Pedro Remembered for Dedicated Service and Love of Music

Hundreds crowded into the large Twin Lakes Church in Aptos to honor Officer John Pedro. Despite the enormous assembly, the mood was quiet as a tuba quintet, The Bay Area Tuba Union, played a selection of classical pieces. John, a band member in the Air Force Reserves, was partial to tuba music.

Officer Pedro died June 3, two weeks shy of his 37th birthday. He is the 193rd patrolman to die in the line of duty since the Department formed in 1929.

An hour and 14 minutes into his day shift, Officer Pedro, I.D. 12918, was fatally injured after losing control of his patrol vehicle on an exit at Highways 1 and 129. Onlookers said his all-white Crown Victoria had been accelerating but slowed as he took the curved ramp eastbound toward Watsonville at approximately 7 a.m. The witnesses, who were behind Officer Pedro when he was on Highway 1 near the Pajaro Bridge, saw the rear deck lights activated but did not hear a siren. Officer Pedro appeared as if he was going to pull over the motorist ahead of him. The investigation continues but officials at the scene speculated Officer Pedro wasn’t in pursuit since he did not make a call to dispatch.

His patrol unit veered into some ice plant, swerved across the ramp and turned sideways before it struck the embankment and flipped over numerous times. His vehicle struck a big tree, which snapped. The impact killed Officer Pedro instantly.

Good Samaritan motorists stopped to help but it was too late. Firefighters required the use of hydraulic extrication tools to remove Officer Pedro’s body. Many of the emergency responders on scene knew the Watsonville-born officer, a 1983 graduate of Watsonville High School. John had earned a degree in music from Cabrillo College and then studied anthropology, with a minor in music, at San Jose State University. John joined the Department in July 1989 and subsequently worked for Coastal Division as a mobile road enforcement officer, a position where he could indulge his lifelong love of big rigs. He transferred to the Santa Cruz Area earlier this year.

About 500 mourners including family, friends, CHP colleagues, firefighters, area deputies and police officers – some even from out of state – attended the June 6 service at Twin Lakes Church.

Those who knew John well shared stories of his boyhood fascination with trucks, his fondness of music (particularly tubas) and performing, and his unadulterated penchant to do anything to make his young daughter laugh. Mostly John was remembered for his love of being an officer who dedicated himself to helping the public.

“There is an awful lot we do that does not involve tickets,” said Pedro’s friend and retired CHP Officer Joe Bowes, I.D. 8741, in a newspaper interview. “He was always willing to help people. If he found someone broken down on the road, he would go get gas, replace a windshield-wiper blade, give them a ride to a phone. He was more than happy to do it.”

Entertainer Cliff Bemis, who composed the tune, “The Badge of the CHP,” performed it at Officer Pedro’s service.

“When I wrote this song, I didn’t realize I would sing it at so many funerals,” Bemis said. “It isn’t an easy thing to do.”

In a heartrending coincidence, Officer Pedro was a former Academy roommate and graveyard partner of Officer Sean Nava, I.D. 12890, who died in October 2000. An underage intoxicated motorist returning from Tijuana struck Oceanside Area Officer Nava as he collected the last of measurements from an earlier solo-vehicle crash involving another suspected drunken driver.