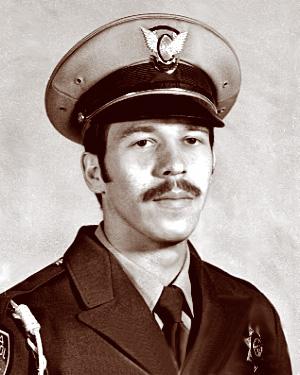 Officer Michael A. Brandt was pursuing a suspected drunk driver on U.S. Highway 74, a winding mountain road near Palm Desert, when he lost control on a sharp curve, skidded over a 15-foot embankment, overturned and landed upside down. Brandt was found strapped in the driver’s seat but died just hours later from his injuries. The 35-year-old patrol officer had been a member of the CHP for eight years. The vehicle Brandt had pursued was located 150 feet down the side of the mountain, wrecked and in flames but the driver and two small children had been ejected and survived. The driver was subsequently charged with felony DUI, felony manslaughter and child endangerment.