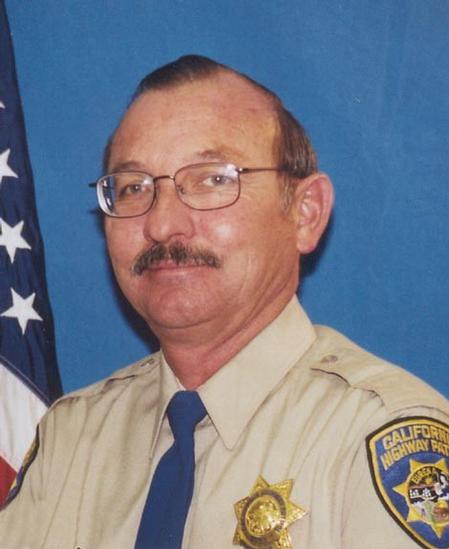 Officer Pino Remembered for His Dedication to the CHP

Officer Paul Pino died the morning of Dec. 30, 2003. It was in between early winter storms on Highway 395, a beautiful stretch of road shadowed by Mt. Whitney, east of the Sierra Nevada Mountains. It is the main route used by Southern California winter sports enthusiasts on their way to Mammoth Mountain or Lake Tahoe. That morning a young driver in a SUV, fighting to stay awake after a night of partying, was headed north — and headed toward disaster.

Officer Pino, I.D. 9735, had pulled over a big rig on Hwy. 395 south of Olancha and was sitting in his patrol car on the shoulder of the northbound lane, writing a citation. Suddenly, just behind him, the SUV approached, swerved onto the shoulder, then spun out of control as the driver apparently tried to bring it back onto the road. The SUV careened into Officer Pino’s car, pushing it into the truck, and Pino sustained grave injuries. Initially transported to Inyo County Hospital, he was airlifted to Ridgecrest Hospital, where he was pronounced dead.

The driver, Carley M. Crystal, 20, of San Diego, was arrested on manslaughter and DUI charges. She had three male passengers, one who sustained moderate injuries.

As further testimony to his commitment, Pino always was willing to be on call and would often volunteer to come in if he heard a request for backup on the radio. “He had a good relationship with everybody,” said Sgt. Underwood.” He was the kind of employee you want to get the job done.” When the latest heightened security period started, Pino was enjoying a cruise with his wife. He called every day from the ship and asked if he was needed. “I could have a helicopter come get me if you want,” he said.

Pino had the pleasure of driving one of the test Camaros during the past year and was heard saying that if he died he wanted to be buried in his Camaro. Although that now sounds eerily prophetic, his fellow officers acknowledged his love for the car and the Camaro accompanied his body back from his autopsy in Bakersfield and led his funeral procession.

Bishop Area Sgt. Mark Badovinac, I.D. 10208, said, “Paul always had something interesting or funny to say. We never missed him for very long because he’d be calling me up from wherever he was. Once he called me from a movie detail in Death Valley and told me he was eating lamb shank and shrimp cocktail out there in the desert.”

“Sometimes Paul would put little things in his car. He used to have a little plastic pig on the dashboard of his Camaro, and if you squeezed it just right, it made a pig sound,” said Badovinac. “One day, though, I noticed something sticky all over the dashboard. He told me the pig had melted in the sun. I had to get the car detailed, and I told him ‘no more pigs on the dashboard.’”

Regardless, Pino enjoyed having a little creature in the car with him. During the holiday season he had a little Grinch doll in a Santa suit perched next to the rear antenna. When the responding officers got to his accident scene, something caught their eyes. The little Grinch was sitting straight up on the dual tires of the big rig, looking back at the officers and at the wrecked SUV.

Officer Cheyenne Quesada, I.D. 14594, is also a Lone Pine Residence Post officer and one of Pino’s closest friends. “He was a mentor, like an older brother, my best friend,” said Quesada. “We told each other that if anything happened to either of us, we would take care of the other’s family.” Quesada has made it a priority to be with Pino’s family and support them in whatever capacity he can. Pino was married to his high school sweetheart, Carol, for 28 years, and left behind four daughters, ages 15 to 24, two of whom still live in the Lone Pine area. “Paul’s best work was his family; they were his masterpiece,” said Quesada.

Quesada was very complimentary to the top management of the CHP during the difficult time following Pino’s death. “Thank you to the commissioner, chiefs and everyone else. It makes me proud to be a CHP officer. They pulled out all the stops. When something like this happens you see what everyone’s made of,” he said.

Pino and Quesada had a pact that if one ever died in the line of duty, at the funeral the other would read a passage from Shakespeare’s “Henry V.” Quesada held true to his promise and delivered the eulogy at Pino’s funeral. With Sgts. Underwood and Badovinac at his side, he read the passage below. He also wrote his own words, defining the man who has inspired him to be the best officer he can be: “He was a man of honor, cheerful in all types of weather; never shirked a task, and had splendid behavior.”

“Whoever does not have the stomach for this fight, let him depart. Give him money to speed his departure, since we wish not to die in that’s man’s company. Whoever lives past today and comes home safely will rouse himself every year on this day, show his neighbor his scars, and tell embellished stories of all their great feats of battle. These stories he will teach his son and from this day until the end of the world we shall be remembered. We few, we happy few, we band of brothers; for whoever has shed his blood with me shall be my brother. And those men afraid to go will think themselves lesser men as they hear of how we fought and died together.”