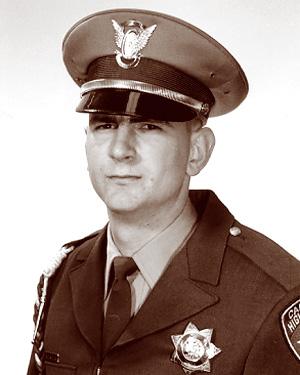 Officer Dies After Collision on Side of Road

Officer Raymond E. Miller was standing with a truck driver he was citing for illegally parking on the shoulder of Interstate 5 near Bakersfield when a truck-tractor drifted onto the shoulder and crashed into the patrol unit. The impact of the collision rammed the patrol car into the two men, crushing their legs. The truck then continued across all traffic lanes into the center divider where it overturned. Although he had sustained severe leg injuries, Miller directed traffic and emergency operations as he lay on the ground. Three weeks after the accident, Officer Miller died of a massive pulmonary embolism while waiting for surgery on his injured legs. He was 41 years old and a 16-year CHP veteran.