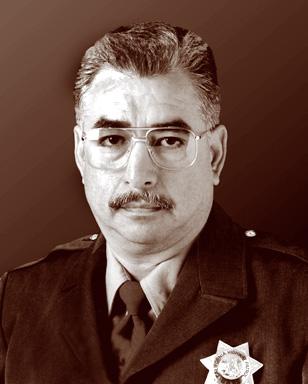 Officer Reuben F. Rios was directing traffic as it left a concert at the Glen Helen Pavilion by Interstate 15 when an intoxicated motorist accelerating for a lane change struck Rios. The patrol officer was thrown onto the hood, then into the windshield and fell to the pavement with head and internal injuries. Fellow officers immediately rushed to Officer Rios’ aid and he was transported by ambulance to the hospital, but died hours later. The 53-year-old patrol officer was a 22-year CHP veteran and had been assigned to the San Bernardino Area office since graduating from the Academy in 1974. The same day Officer Rios died, his son Reuben Jr. took the oral exam to enter the CHP. The driver of the vehicle that killed Officer Rios was charged with felony DUI and second-degree murder.