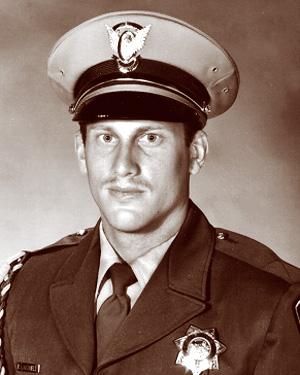 Officer Richard A. Maxwell was attempting to make an enforcement stop on a suspected stolen vehicle when the vehicle pulled into a residential driveway. The two occupants, later identified as a father and son who lived at the residence, exited the vehicle and both became combative with the officer. The son ran to the suspect vehicle and retrieved a shotgun, with Maxwell following. While Maxwell was struggling with the son, the father retrieved a 12-gauge shotgun from the garage and opened fire on the unsuspecting officer. Officer Maxwell was first shot in the face while he was returning fire. He stumbled to the ground and the suspect fired above his neck line which ultimately killed him. The officer returned fire (12 rounds), but none of his shots hit his assailants, and the suspects fled. Two CHP officers arrived, spotted Maxwell slumped in the driveway, brought him to a place of cover and immediately began first aid. Maxwell’s wounds proved too severe and the 33-year-old officer died just minutes later. Officer Maxwell had been a member of the CHP for five years. Originally, the two suspects were arrested, tried and convicted of murder. However, the father who was sentenced to first-degree murder, AFTER EXHAUSTING HIS APPEALS IN THE STATE COURTS, filed a subsequent appeal IN FEDERAL COURT and a new trial was granted. He was tried by the Kern County DA’s office twice with hung juries, with the third trial held in Santa Maria with a verdict voluntary manslaughter. Due to the 12 years served, the judge ordered him immediately released. The juvenile was convicted of second-degree murder and sentenced to the Youth Authority until age 25 and is currently out.

Officer Maxwell is survived by his wife, Marlene and daughter Megan.