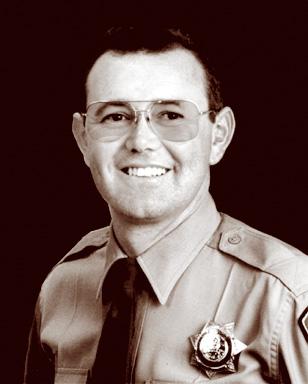 Officers Rick Stovall and Britt Irvine, partners on graveyard shift, were responding to a possible truck accident on mountainous State Route 166 east of Santa Maria. Rain and fog made visibility poor. Their route took them along the Cuyama River, swollen by recent storms. A huge section of roadway had been chewed away by the raging river and their patrol car plunged 20 feet into the torrent. When dispatch lost radio contact, CHP and allied agencies began to search. It wasn’t until the next morning that a CHP helicopter crew found the Patrol car, upside down, buried in silt, with only the tip of one wheel visible. Officer Stovall, 39, was an 18-year veteran of the Highway Patrol and the son of retired CHP Officer R. B. Stovall. Officer Britt Irvine, 40, had served 15 years with the Highway Patrol.