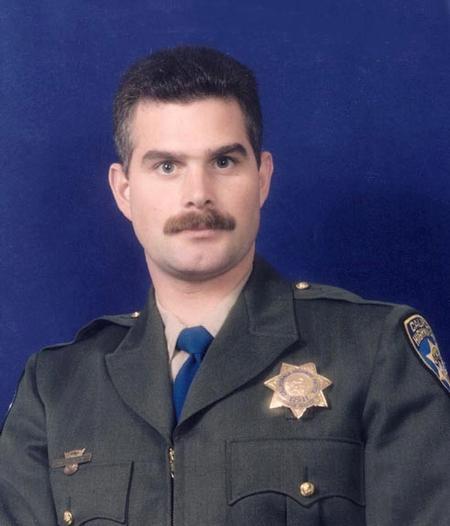 In a small town, it’s easy to get to know the local law enforcement officers, especially when they are friendly and helpful and active in the community. So the tight-knit town of Weaverville was in mourning when Officer Robert Coulter, I.D. 12941, died in a tragic accident. Coulter, 39, died Nov. 2 after his shotgun apparently discharged unintentionally while he was locking it into place in his patrol car.

He leaves behind his wife, Kelly, and two children — son Kyle, 14, and daughter Dahlia, 10. The Coulters suffered the loss of an infant son, Cameron, several years ago due to Sudden Infant Death Syndrome. Kelly Coulter said in a newspaper interview that she envisions her husband and son together now, riding a motorcycle on the streets of heaven, as fast as they like.

Officer Coulter was with the CHP for 14 years. Prior to his assignment at Trinity River, he worked out of the Los Banos Area office. At his memorial service, several local citizens spoke about the positive impact he had on their lives. He seemed always to help those who needed it.

Coulter met Kelly while working in the Army. He was a military police officer during his five years of service. He started his career in the CHP in July 1989. While working in Los Banos, he became friends with Officer Jason Dotzenrod, I.D. 13611, who later transferred to the Trinity River office.

“I worked with Rob in the Los Banos area before I came up here,” said Dotzenrod. “He called me one day from Los Banos to let me know that he was coming up here for a packing trip in the Trinity Alps. I can still remember the day he stopped by my house after his trip. He had this big Cheshire Cat grin on his face and he said, ‘I’m moving up here!’

Coulter and his family bought 40 acres outside of town and built their dream house and loved living in the mountains.

“He cherished his family and everything that went on in all their lives,” said Dotzenrod. “He and his family vacationed all over the world. Traveling was a big thing to Rob, and he and Kelly were always heading off to some big motorcycle event.

“He would stop what he was doing at the mere mention that you needed a hand with something,” he added. “He was there for everyone and it saddens me to know that no one was there for him when the accident occurred.”

A memorial service attended by hundreds of local law enforcement and emergency crews was held in Weaverville Nov. 10.

Dotzenrod summed it up for many people who knew and loved Coulter. “There’s so much to say about Rob. I miss him a lot.