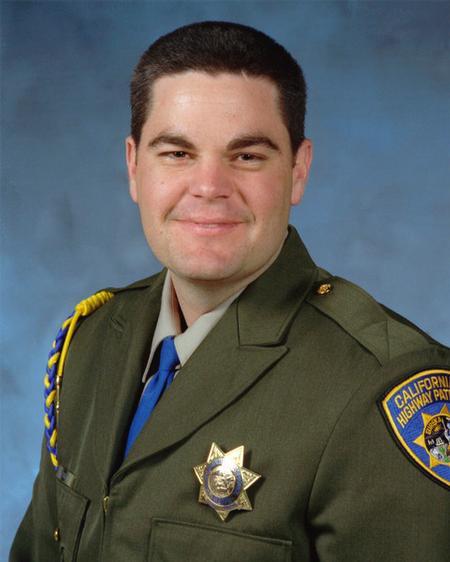 It was already a hot morning in Winterhaven on Sunday, June 10. Officer Robert Dickey, I.D. 17001, was patrolling Interstate 8 when the tire on his patrol vehicle was punctured and his car flipped several times, damaging it so much it was barely recognizable as a CHP car.

Two other officers quickly responded to the scene. Despite his extensive injuries, Dickey went in and out of consciousness and spoke to them. He was life-flighted to the Yuma Regional Medical Center in Yuma, Ariz., where he died a short time later.

Officer Dickey is remembered for his great sense of humor. “He was always in a good mood,” said his co-worker Officer Al Contreras, I.D. 13020. “He was an awesome guy. He was funny and would cheer you up.”

Officer Dickey graduated from the Academy in early 2002 and worked in the Winterhaven Area for the past four years. He was raised in El Centro and was devoted to his family. He met his wife, Yekaterina, when he was attending the Academy. His son turned 1 year old three days after Dickey’s death. “He didn’t want to work overtime,” said Contreras. “He always wanted to be with his family.”

Visitation for Officer Dickey is scheduled for Thursday, June 14, 6-9 p.m. at Johnson Mortuary, which is located at 1415 First Avenue in Yuma, Ariz.

A funeral will be held at 10:30 a.m. Friday at Southwest Performing Arts Theater, located on the grounds of Southwest High School at 2001 Ocotillo Drive in El Centro, Calif.