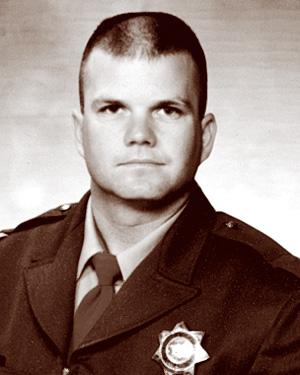 Officer Scott M. Greenly made an enforcement stop on State Route 85, approached the passenger side and gave the motorist a verbal warning for following too closely. He was returning to his patrol car when a speeding vehicle ran off the roadway onto the raised freeway embankment, striking the patrol car, sideswiping the vehicle he had been standing next to, then finally hitting him and dragging his body across three lanes of traffic. Greenly was transported to the hospital, but succumbed to his injuries while being treated by medical personnel. The 32-year-old officer had been assigned to the San Jose Area after graduating from the Academy three years earlier. He had recently become a motor officer, but was using a patrol vehicle because of inclement weather. The driver of the car that struck and killed Officer Greenly was charged with second degree murder and sentenced to State Prison.