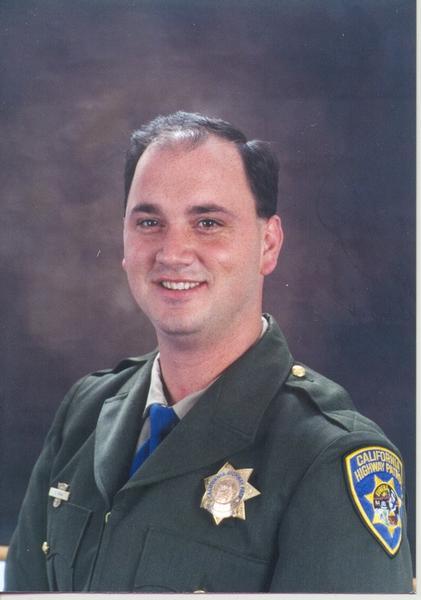 Described as a big man with a big heart, a great individual and a devoted family man, Sean Nava, I.D. 12890, was well known for his courage and professionalism.

“He wasn’t just good at the technical aspects of policing,” said Oceanside Public Affairs Officer Teri Reese, I.D. 11861, in a newspaper interview. “He was the whole package and a wonderful team player.”

“This just makes me feel ill,” she said of Sean’s on-duty death in late October at the hands of a suspected drunken driver. She said the CHP is a family that takes it hard when one of its members is lost.

An estimated 1,500 officers, including those from out of state, attended services held Nov. 2, 2000, at Mission San Luis Rey in Oceanside. In his eulogy, Sean’s partner, Mike Kelley, spoke of his compassion. In one instance when local shelters were full, Sean was so moved by a homeless man’s plight that he gave the man some money for food and a warm place to stay.

Reese noted that Sean died during Red Ribbon Week, “when we’re all trying to make people extra aware of the dangers of driving while drunk.”

Shortly after daybreak Oct. 28, Sean, 33, was collecting the last of measurements of an earlier solo-vehicle crash involving a suspected DUI driver on northbound Interstate 5 near Tamarack Avenue in Carlsbad.

Meanwhile another DUI suspect Christopher Paul Merrick, traveling recklessly at an estimated 75 mph, drove into the median strip to pass another vehicle and struck Sean as he worked. Merrick drove off in his Toyota 4Runner with its shattered windshield and mangled front end.

While Sean’s short life was taken too soon, Merrick exited the freeway into a neighborhood where he and his passenger, 22-year-old James Ron Smith of Denver, proceeded to have a shouting match. Awakened residents complained to police who already had been notified of a hit-and-run involving a SUV and a CHP officer. Police quickly intercepted Merrick and Smith before they could leave the neighborhood.

A witness subsequently identified the Toyota 4Runner and Merrick as its driver in the incident. Merrick’s blood-alcohol level exceeded .08.

Merrick, a Breckenridge, Colo., resident, subsequently had his bail upped to $2 million. He faces a number of felony charges: second-degree murder, DUI, and hit-and-run. Smith was detained for questioning then released.

The two reportedly were returning from a night of drinking in Tijuana. Merrick is 20 years old. Both told police they were students who were staying in the city of Orange.

Records show that Merrick was convicted in Colorado for an “underage alcohol offense.” He received a one-year deferred sentence in which he was required to perform 60 hours of community service, make a financial donation to a victims’ of crime fund as well as complete an alcohol education class.

Reese said Helmick and Orr also talked with Sean’s colleagues at the area office as well as the investigating officers at the crash site.

“We were very touched by the extra effort, that they would take the time to talk with the officers still investigating the scene. It really meant a lot to all of us,” she said.

Sean is the 190th CHP officer in the Department’s 71-year history to make the ultimate sacrifice. The last time the CHP family lost its heroes was in 1998 with the tragic on-duty deaths of Scott Greenly of San Jose in January, Rick Stovall and Britt Irvine, both of Santa Maria in February and Christopher Lydon of El Cajon in June.

Born in West Covina and reared in Oceanside, Sean enlisted in the U.S. Army after his high school graduation. He served as a military police officer in Germany as well as in Herlong, Calif., where he conducted undercover narcotics investigations with the Army’s Criminal Investigative Division.

With an honorable discharge from the military, and attaining the rank of sergeant, he received his appointment to the CHP July 31, 1989.

While a cadet, he met Melanie Smith, whom he married after they both graduated from the Academy. He then reported to the San Jose Area Office where he stayed for 2-1/2 years before transferring to San Diego. Melanie, I.D. 12948, later transferred to the same area office and the two worked together on the graveyard shift.

Melanie subsequently retired to care for the couple’s two children. Meanwhile, Sean honed his skills in identifying and apprehending impaired drivers as well as preparing and executing all types of search warrants.

“We will miss him terribly. He was a great guy, a stellar officer,” said Officer Reese. “He was the kind of guy who would always help someone get off the highway safely, or get them a gallon of gas if they had run out.”

Two years ago his more heroic efforts were recognized, earning him one of the San Diego Burn Institute’s Spirit of Courage awards. In mid-June 1999, Sean – while off duty and on his way home – braved a flaming, wrecked vehicle to free the driver whose legs were stuck underneath the mangled dashboard. Ultimately the driver perished, but Sean’s courage and determination were still lauded.

In September 2000, the California State Firefighters Association awarded Sean the Medal of Valor for his selfless act in that same incident. Officer Reese said Sean preferred the graveyard shift during the majority of his career and focused his efforts to getting impaired drivers off the road.

Off the job, Sean recently graduated with degrees in business management and computer science from the University of Phoenix with the goal of helping colleagues with financial planning for their retirement.

Additionally, Sean and Melanie, daughter, Alexandria, 7, and son, Patrick, 4, enjoyed camping throughout the state, but most of all spending time together.