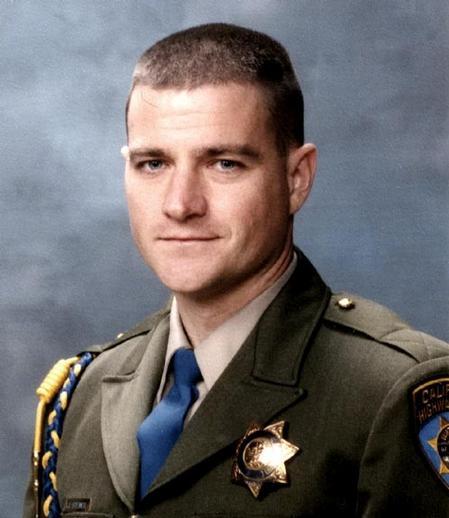 Officer Thomas J. Steiner, I.D. 15729, was gunned down in front of a Pomona courthouse April 21 at approximately 2:45 p.m. Steiner had finished testifying in a series of traffic cases and was walking to his car. As he was about to cross the street, a car stopped, the driver got out, leaned over the hood, yelled obscenities at Steiner and fired four shots at him. The killer got back into his vehicle and sped away.

The alleged killer, Valentino Arenas, 16, a juvenile delinquent in a family of parolees, confessed later that he shot Steiner to win stature with the gang.

Steiner was born on Valentine’s Day, February 14, 1969, in Richmond Va. He moved with his family to California in 1984. Tom attended Milliken High School in Long Beach, Calif., and was very fond of his white T-top Chevy Camaro. Tom received his degree in business from Cal Poly-Pomona and worked as an accountant for Snow Summit Ski Resort in Big Bear, Calif.

He yearned to be in law enforcement so much that while waiting for a spot in the CHP Academy, he accepted a position with the Washington State Police. When he learned of his acceptance to the Academy, he quickly returned to California. During his cadet training, he was the outstanding marksman in his class. He graduated from the CHP Academy April 23, 1999, and was assigned to the Santa Fe Springs Area since graduation. Steiner was a commercial enforcement officer and had the privilege of driving a specially marked white Chevy Camaro, which he loved.

Steiner was a hard-working officer who went out of his way to assist other officers. He worked quietly and diligently. “He was one of the nicest guys I knew,” said Officer Matt Arnone, I. D. 15045, a close friend and co-worker of Steiner’s. He said, “Tom was never mad and always calm.”

Thousands of officers attended the funeral service at the Calvary Chapel in Downey on Tuesday, April 27. In attendance were Gov. Schwarzenegger and Sunne Wright McPeak the secretary of California’s Business, Housing and Transportation Agency.

”The death of Tom Steiner has reached a new low in our history,” said CHP Commissioner Spike Helmick. “A despicable little coward murdered Tom in cold blood. I have a promise to make today to all of the coward’s friends: Their day of reckoning is coming, and it’s coming very quickly.”

“The bullets struck Officer Thomas Steiner, but they were aimed at all of us,” said McPeak. “Officer Steiner paid the ultimate price, but we too are the victims of this senseless act of violence.”

Steiner was a devoted husband, proud father and loving son, who enjoyed hiking, camping and riding his mountain bike. He was also a fanatical “techie,” and he filled his home with the latest high-tech gadgets.

Beutter said Steiner’s family meant everything to him. He said, “I remember him talking about his son, Bryan, a short time ago, and he just stopped and turned to me and said, ‘I love that kid more than anything.”

Tom is survived by his wife, Heidi, Bryan, 3, stepson, Justin Thomas, 13; parents, Ron and Carole; sister, Julie Sparks; and a host of relatives and friends. He will be dearly missed by his family, friends and entire CHP family.