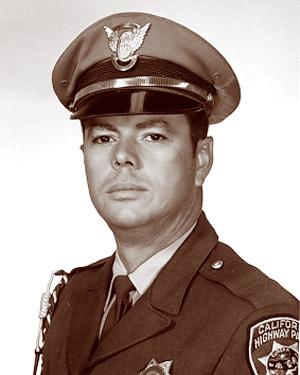 Officer William R. Court was in pursuit of a traffic violator when his patrol unit skidded on a rain-slicked pavement and he lost control. Courts patrol car left the roadway, turned at an angle and traveled over 175 feet before striking a cement bridge abutment. The 33-year-old patrolman was killed almost instantly. Court had been a member of the CHP since 1965 and served previously in the San Leandro Area office before transferring to Modesto in 1967. When Officer Court died, a feature article appeared in the Turlock Daily Journal which is excerpted below:

“When he was just out of the Academy, Bob Court slid down a steep embankment to aid a couple who’d gone over a cliff in their car. It was a bitterly cold night. Frost on the roadway. Ice on the ground. Officer Court was the first to take off his duty jacket and cover a victim. It took four hours to bring the injured out, but Officer Court stayed with the job until it was done . . . There was another incident . . . He kept a young woman alive for more than an hour until a doctor came. Shed smashed up her car. Cut her throat. There was room in the wrecked car for only one person. Tall, slender Bob Court crawled in. He held the womans chin up. The air sucked in and out of her cut wind-pipe. She bled, but she breathed. And she lives today.”